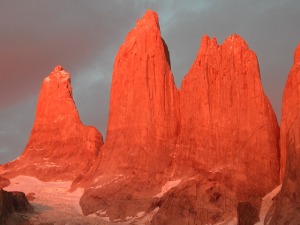 The man who regularly speaks without a burden should stop speaking until he finds one. Or one finds him.

Until our lives have weight, our words will have none. And until we bear a burden, our lives will be weightless. Burdenless lives produce weightless words.

A man’s burden tells us who he is. It tells us what he cares about, why we should join him, and what it will cost us if we do.

Burdenless people meander. Their words meander, too, just like their lives. There’s nothing to say, but so much saying. Their words have no impact, because impact is proportional to weight.

But burden-bearers waste no steps, and waste no words. There’s no time, no energy for distractions. They’re locked in. You can’t chase fluff when you’re carrying weight. Then, when the weighted man makes contact, no matter his speed, there’s impact.

I remember a grizzly dorm leader from my college years. At competitions he would wear a black t-shirt with one sentence typed in white, all-caps: “I YELL BECAUSE I CARE.” He did, and he did. And I remember. Not that he yelled, but that he cared.

Humankind isn’t designed to be weightless. We’re meant to carry. Our planet has gravity. So have gravitas. Then, once you have some terrific gale hurricaning within you, some clawed idea slashing from within to get out, some burden pressing you down and pressing you out by sheer force, then by all means, speak, and people will listen. They may follow or mock or kill you, but they’ll listen. Not because you yelled but because you cared.

2 thoughts on “The Burdened Life and the Weighty Word”