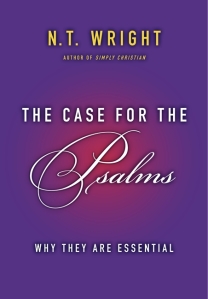 The Psalms are the pulse of the saints. The Psalter expresses the peaks and valleys of God’s people throughout the centuries, mapping the landscape of our lives and echoing the rhythm of our hearts. What would Christians do without the Psalms?

The Psalter is the only God-breathed hymnbook, and it’s as magisterial as we might expect a God-breathed hymnbook to be. In The Case for the Psalms: Why They Are Essential (HarperCollins, 2013), eminent NT scholar N. T. Wright joins a welcome chorus of church leaders calling for the reestablishment of this sacred songbook at the center of the church’s worship.

This book is a personal plea. The Psalms, which make up the great hymnbook at the heart of the Bible, have been the daily lifeblood of Christians, and of course the Jewish people, from the earliest times. Yet in many Christian circles today, the Psalms are simply not used. And in many places where they are still used, whether said or sung, they are often reduced to a few verses to be recited as “filler” between other parts of the liturgy or worship services. In the latter case, people often don’t seem to realize what they’re singing. In the former case, they don’t seem to realize what they’re missing. This book is an attempt to reverse those trends. I see this as an urgent task (p. 1).

Recovering the Psalter and Its Worldview

Why is recovering the Psalter an urgent task for the church? Wright’s explanation is surprising but ultimately rewarding, as he rests his plea on three worldview pillars: (1) time, (2) space, and (3) matter. The psalmists’ inspired perspective on these three deeply human realities carry transformative power, as they teach us how God’s time and our time intersect, how God graciously rejoins human space by bringing heaven back to earth, and how matter itself (starting with us) is being recrafted into the new world for which the psalmists hope.

The Psalms, then, are a crossroads within the great story of Israel. Here God’s mighty acts of redemption (past) electrify the saints’ imagination (present) as we anticipate his coming deliverance (future). Here we are invited into Israel’s temple to meet Israel’s God on his sacred Mount Zion as heaven meets earth. And here, through psalmic worship, we ourselves are transformed into the worshipers whom God is recrafting to fit the coming new creation in which righteousness dwells.

The Story of the Psalter

The threefold lens through which Wright views the Psalter is at once surprising and opaque, innovative and rewarding. His connections, along with their merits and takeaways, are not immediately or entirely clear. Nevertheless, there’s an admirable depth that repays careful reflection.

Part of the strange work of the Psalms is to draw the terror and shame of all the ages together to a point where it becomes intense and unbearable, turning itself into a great scream of pain, the pain of Israel, the pain of Adam and Eve, the pain that shouts out, in the most paradoxical act of worship, to ask why God has abandoned it. And then of course the Psalms tell the story of strange vindication, of dramatic reversal, of wondrous rescue, comfort, and restoration (32).

Thanks to HarperCollins for providing a free copy for unbiased review.

One thought on “The Case for the Psalms by N. T. Wright (Review)”