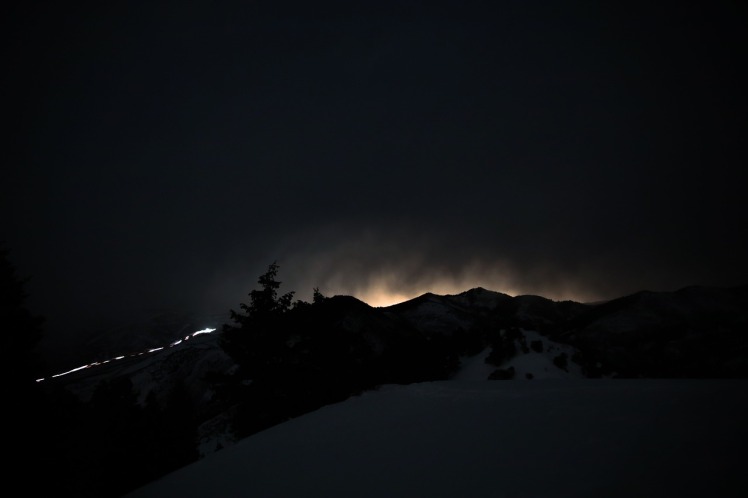 I am
the resurrection
and the life.

From all appearances, Jesus arrived too late. Far too late. And not fashionably, stylishly late, but wrongfully, neglectfully late.

When he heard that Lazarus was ill, he stayed two days longer in the place where he was (John 11:6).

Who does this? Who, having the power to stop a bad thing from happening to a good friend, purposely stays away?

Back up a verse and it gets even worse:

Now Jesus loved Martha and her sister and Lazarus. So, when he heard that Lazarus was ill, he stayed two days longer in the place where he was (John 11:5-6).

Wait. Not only does Jesus know Lazarus is sick and still delays, but Jesus waits because of his great love for this family?

In what world do love and neglect marry and bear beautiful children? In whose mind do affection and avoidance dance together in symmetry? How, in the mind of God and the life of Jesus, can you fit a love for Lazarus with letting him die?

When my son was a little boy, I took him into the woods behind our house one winter night to gather sticks. We were only thirty yards from the house, with all its windows lit. So I decided to test him. I hid behind a tree while he kept working in the moonlit snow. It took him a minute, but suddenly he realized I wasn’t around.

My plan was to see if he’d push through the panic, gather himself, and head for the house. I wanted him to learn a valuable lesson. But I couldn’t handle it. Within a few seconds I stepped out from behind the tree.

But for the mourners in Bethany, the hours and days keep ticking by. No Jesus; no healer; no Great Physician. Yet he loves Martha, and Mary, and Lazarus—doesn’t he?

It didn’t have to be this way. Everything could’ve been different.

They had seen the miracles—the healings, the exorcisms, the signs and wonders. We’re in John 11, not John 1. Jesus has already done a lot. He’s showed his cards.

“Could not he who opened the eyes of the blind man also have kept this man from dying?” (v. 37)

They were both men. Men in need. He made the blind man see—John 9. He could’ve made the sick man well—John 11. But he hadn’t.

Now, this complaint sounds quite worshipful, in its own way. “Jesus, we know you could’ve kept death away! You’re so powerful!”

But is pushing back Lazarus’s death all Jesus could’ve done? Is his power merely preventative?

Listen to their words. And listen to how the grammar of their words betrays their perspective:

“Could not he who opened the eyes of the blind man also have kept this man from dying?” (Jews, v. 37)

But did they believe Jesus could raise Lazarus from the dead?

When Jesus first arrived, Martha was hopeful: “Even now I know that whatever you ask from God, God will give you” (v. 22). But her hope for an immediate miracle seems to fade quickly as Jesus makes no explicit promise.

So when he tells Martha, “Your brother will rise again” (v. 23), she responds, “I know that he will rise again in the resurrection on the last day” (v. 24). Her faith looks far into the future, where she knows God has a happy ending planned.

But Martha doesn’t quite know how Jesus fits in. She knows that God in heaven is the one who raises the dead, but that kind of thing only happens in distant chapters of the story. So Martha doesn’t hear the layers beneath what Jesus is saying.

But Jesus is saying far more than she’s hearing. He’s saying far more about himself, and far more about what he’s about to do—not just with Lazarus, already rotting in Bethany’s tomb, but with his own body, which will soon be buried outside Jerusalem. And not just with his own body, which God will soon raise from the dead, but with the bodies of all who trust in him for the forgiveness of their sins.

Jesus is saying a lot more than they’re hearing.

Of course, we need to be careful here. We shouldn’t critique Martha and Mary and the Jewish onlookers without examining our own hearts.

We shouldn’t just take the helicopter view of this story. We need to walk it, hike it, sweat it out, make it part of our own lives. We need to have our own lack of faith exposed, our own boxes exploded.

We need to become Martha, and Mary, and the bystanders, and even Lazarus himself. We need to read into the story our trials, and our doubts, and the limitations and misinterpretations we ourselves place on Jesus of Nazareth.

We too need to see Jesus in the fresh light of who he really is and what he really does and how he really works.

This isn’t easy to do. Because there’s a challenge for people who know the Bible’s stories: We know how things turn out. So the palpable tension, the unbearable angst, the soul-crushing grief—they barely register.

“It’s all good, Martha! Don’t you know how this turns out?”

“Turn down the wails, sweet Mary, your brother’s gonna be just fine.”

“Come on, everybody, holster the doubts—haven’t you read through the end of the chapter yet?”

They’re in the story, just like we’re in our own story. They’re waiting for the page to turn, like we’re anxiously waiting for our own pages to turn. And while their finite minds recall smidgens of how God worked in pages past, they’re still waiting and groaning and devastated as they navigate their current chapter.

Because it’s not that easy.

Their eyes had seen and their ears had heard, yes, but remember what Jesus taught: The eyes and ears he wants to reach are the eyes and ears of our hearts. And those are much harder to reach.

But it’s not impossible.

It takes someone who’s willing to stretch our sight until it tears, someone to call us out upon the waters where feet may fail,¹ someone to look us right in our cataracts and ask, “I know you can’t see, but will you believe?”

Where can we find someone who loves us like this? John 11. This is exactly who Jesus is, and this is exactly what he’s doing. Did you hear John’s not-so-subtle hint earlier in v. 4? When Jesus first heard the news about Lazarus’ condition, he said,

“This illness does not lead to death. It is for the glory of God, so that the Son of God may be glorified through it” (v. 4).

Two days later, when he knows Lazarus is dead, he explains,

Then, before the famous act, which has reverberated throughout history, he asks Martha a final question:

Brothers and sisters, if you believe, you will see the glory of God. Not mainly in a rebuilt church facility or a restored home or better flood management in the city of Houston. I can’t promise you those things, because God has not promised us those things. But what God has promised is that he is for us, that he is working for our good, and that he longs for us to see his glory and be satisfied in what we see.

In the days and weeks and months to come, we will be tempted just like Martha and Mary and their Jewish friends were tempted. We’ll look at all we’ve lost, and all we’re suffering, and how we feel, and then we’ll look at Jesus who seems to be far away, and we’ll do these three things:

So we’ll need to remember that his love is intentional—he knows his glory is the best sight we can ever see.

We’ll need to remember that his power is limitless—he can and does raise the dead.

And we’ll need to remember that his ways are mysterious—he’ll take us through death on the way to life.

The one we worship, Jesus of Nazareth, is the resurrection and the life. He died on the cross for our sins, he’s already been raised to new life, and he’s the head of this church, his body on earth.

And if that’s how he works—bringing death from life, both in Lazarus’s sickness and his own crucifixion—should we expect any different strategy as he works in our lives?

If we listen carefully to John 11:4, perhaps we might hear Jesus saying,

“This flood does not lead to death. It is for the glory of God, that the Son of God may be glorified through it.”

¹ From “Oceans” by Hillsong United.