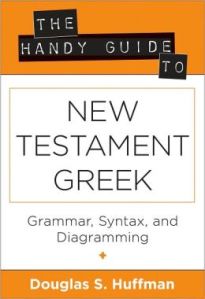 I recently reviewed Dr. Douglas Huffman’s very helpful Handy Guide to New Testament Greek. Dr. Huffman was kind enough to answer a few questions about biblical Greek and the value of keeping up with the biblical languages.

How did you get into biblical Greek, and what made you enjoy it enough to continue studying and eventually teach it?

I first took biblical Greek as a sophomore in college. I had a Christian ministries major and Greek was the required foreign language, but I remember being drawn to learn to read the New Testament in the language in which it was written. Learning quickly that Greek was not a “secret code” language to be unlocked, I gained an appreciation for how languages work and the benefit of reading a work in the “full color” of its author’s language.

What motivated you to write The Handy Guide to NT Greek?

My goals for The Handy Guide to New Testament Greek were threefold: a) to summarize all the salient points of two years of language study in 100 pages, b) to do this in a helpful and accessible format, and c) to introduce phrase diagramming, which makes it possible to get a sermon or lesson outline faster out of the Greek text than you can out of the English text. In addition to the “color” of reading the New Testament in its original language (or as perhaps it is better to say, “as part of the ‘color’ of reading in Greek”), it is this third goal that motivates my teaching of Greek. I am currently meeting about once a week with a group of students so that we can enjoy reading Greek together, discussing what the New Testament has to say and how the Greek helps us appreciate that message. It is great fun and great learning.

Did you have periods when you got away from Greek? How did you get back into it?

I have had the tremendous advantage of being in an academic environment for my whole life. This means that I have had the opportunity to regularly teach Greek, and there is nothing like teaching a subject to keep you sharp at it. But of course, I understand that sometimes life circumstances call people away from language study for awhile. To get back into it, the idea of working through a full-size grammar seems like a daunting task. This is one of the reasons I wanted to put together The Handy Guide to New Testament Greek: it is a small enough book to carry around without being obnoxious, and it might actually be encouraging to know that two years of Greek can be summarized in less than 100 pages.

How would you advise a busy pastor (is there any other kind?) who wants to refresh his Greek and use it more effectively in personal study and sermon preparation?

More specifically, as I indicated above, the third section of The Handy Guide to New Testament Greek is specifically designed to help a pastor get a sermon or lesson outline faster from the Greek text than from the English text of a New Testament passage. English translations do not typically tolerate the long sentences in which the Greek New Testament was written. This means that one long sentence in Greek (which might have one main thought and three supporting thoughts) will be translated into English with four completely separate sentences that each look like a separate main thought by themselves. This might make for smoother English reading, but it can result in some confusion over which of those four English sentences is really the main thought of the passage. But diagraming the author’s thoughts as expressed in the Greek helps the pastor quickly see which of the four English sentences represents the main thought and how the other three sentences are supportive of that main thought. Thus, a three-part sermon around the one main theme is quickly outlined by simply looking at the Greek construction of the passage.

Do you have any well-worn proverbs you use in the classroom to help students learn or keep them motivated as they study the biblical languages?

What would you say to graduates or pastors who learn about developments in verbal aspect theory and are discouraged that they don’t have the time or the ability to keep up with ongoing research trends?

Thank you for the review of the book. I pray that it will be helpful to getting the gospel message preached with greater effectiveness and excitement.

One thought on “Interview with Dr. Douglas Huffman: Keeping Up with Your Greek”